“There’s No End To A Tragic End”

Ladies, it’s good to have you. The guitar breathes a collective sigh of relief!
The acc

ompanying song is a dedication of sorts to the increasing amount of female guitar players new to the scene. It’s one of the great movements in the world of music performance, education, and recording. Maybe it’s because I’ve taught guitar in public school for 12 years that I am able to see this first hard. With this increased interest, involvement, and desire to play guitar from females the music scene has and will continue to change. It has to right? How can the status quo be maintained when the literal face of guitar playing is becoming more gender friendly?

I’ve always been interested in this movement as myself, and the rest of the guitar staff in the Loudoun County Public School System http://lcps.org touch many lives. The program is understandably vibrant and appealing to many students. We are able to take in many young people who don’t quite fit into the traditional music classes of marching/concert band and choir classes.  I fell very fortunate to be in an area of the United States where s a major guitar program for students from seventh to twelfth grade exists. That has had a direct impact on the Maryland, Northern Virginia, and Washington, D.C. area where I work. There are countless examples of students (at least 40% of them female) contributing to the music culture of the this multi-racial and wealthy areas. To give you an idea of the impact this has consider that over the last twelve years I’ve taught and directed around 2,000 guitar/music students. When you realize that they are now out in the world in locations from here to anywhere, you begin to see the impact of that this could be having as the years progress. It’s a female equality victory of sorts without a cause, or, for that matter, a fight. It just happened.

Add to all this the “Taylor Swift” syndrome http://taylorswift.com/ (not negative at all) and you wake up to the reality 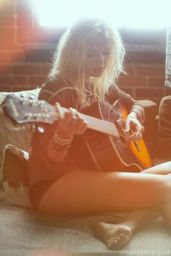 that music will never be the same once the full impact begins to manifest itself. Miss Swift has influenced countless young girls to pick up the guitar and play (no pun intended Who fans). But, not just to play, but to sing also. She is a powerhouse in so many ways. Say what you will you naysayers, Taylor Swift will go down in music history as one of the most powerful women in the business, and rightly so.

But, I digress. Of course, the question inevitably comes up, that is, what do females do on guitar that differs from a the male approach? Do they play softer? With more feeling? With more emotion? Oh God, did I say that? Luckily, these tendencies are not limited to female players as these qualities can also be true with males. Not all males approach the instrument like a possession to be lorded over. Moreover, not all women play the guitar softly and tenderly. So the discussion of differences becomes, in a sense, muted.

Whatever the differences are, there is no doubt that the gender difference does produce two differing approaches to the “vision” of and approach to the instrument. If men and women see the world in a 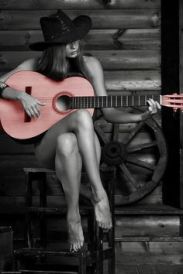 way that differs from each other than that will translate to other areas of life and art.

Finally, let me state that if there is one area that is a definite hurdle for some women, it is hand size. That is a topic that I am currently researching. I will have some preliminary results for you very soon.

As for the issue at large, keep the girls coming. The guitar was sorely in need of a female overhaul and damn if we don’t have one right at our front door! 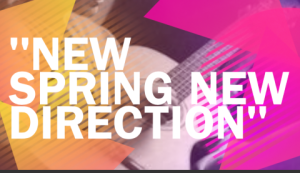